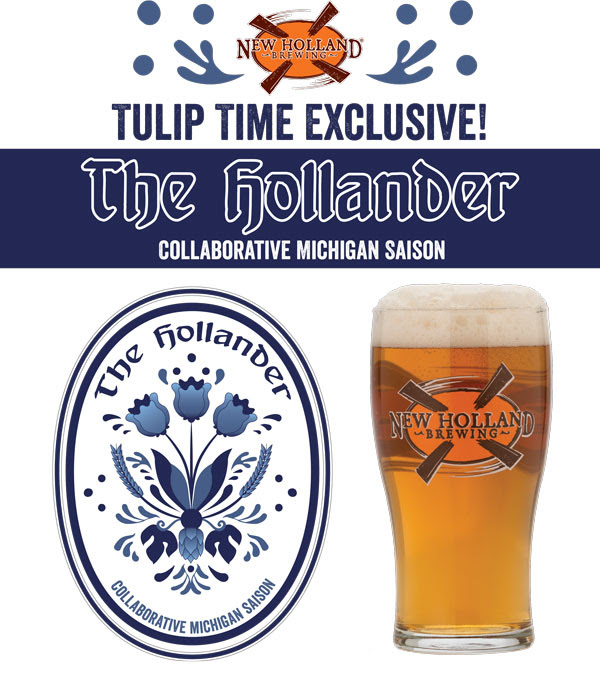 The Hollander is pure Michigan from top to bottom, featuring a yeast strain from the tip of the Keweenaw Peninsula in the U.P., all Michigan-grown hops, Michigan-grown and malted barley, and pure Lake Michigan water.

New Holland Pub on 8th brewer, Steve “Bert” Berthel is no stranger to celebrating Michigan ingredients in his pub specialties. “As someone who has embraced the idea of supporting local farmers and sustainability in my personal life for years, it is truly an honor for me as a brewer to be aligned with a company that will allow me to bring my values to my job.” Berthel continued, “I am excited to be able to have a day where we can make a beer that showcases the high quality ingredients that these Michigan suppliers are providing us and be able to showcase the finished product at this year’s Tulip Time celebration.”

New Holland has been supporting the Tulip Time Festival for nearly a decade and is proud to once again be brewing the official beer for this Holland, MI based festival which is one of the largest festivals in the country. Tulip Time will run May 7-14 with multiple parades, concerts and events throughout the week.

The Hollander was officially “tapped” on April 26 at the New Holland Pub on 8th following an event for the Tulip Time Board and is available at many local Holland establishments through mid-May as well as the New Holland Pub on 8th in downtown Holland along the parade routes. It will also be featured at various Tulip Time festivities throughout the week of the festival. For more Tulip Time information, visit their website.

Open
BLACK IS BEAUTIFUL is a national collaborative bee